GRADUATING SENIORS AND YOUR PARENTS:

MAY 1 WAS PROBABLY "DECISION DAY" FOR YOU, AND MAY YOUR BEST DREAMS BE FULFILLED!

CURRENT JUNIORS, UNDERCLASSMEN, AND YOUR PARENTS:

GETTING YOUR COLLEGE SEARCH STARTED IS A GREAT LOCKDOWN ACTIVITY FOR YOUR WHOLE FAMILY, AND THIS WEBSITE IS A GREAT PLACE TO GET STARTED AND FOCUSED.

I REWRITE MUCH OF THIS SITE EACH YEAR, AND I'M TAKING MY THEME FOR THIS PAGE FROM SOMETHING TOMMY LEE JONES REPEATED THREE TIMES IN A HARVARD ORIENTATION VIDEO A FEW YEARS AGO:

"DON'T WORRY ABOUT THE MONEY."

I'LL BEGIN THAT REWRITE NEXT WEEK, AND I THINK YOU'LL LIKE IT.

This website is beginning its eighth year, and it's devoted to helping you find the most affordable colleges for your kids.
I run this site as a public service - so it's totally free, there are no ads or popups, and you won't be asked for a donation.
It's also totally anonymous.  I will never ask for your personal information, and there is no way for me to gather it.
Here, you will learn how to make the best use of an online resource provided at no cost by every American college.
That resource is not based on useless data about average aid, but the actual aid your family can expect at each school.
Using that resource consistently in your college search will reduce your college costs and loans to the minimum.
So, you're about to learn the modern way to find affordable colleges, and you could easily save $100,000 per student.

A QUICK NOTE ON COLLEGE LOANS:


II.  POSTER KIDS
I learned the skills I teach in this site by helping our son Gregory find effective colleges that we could all really afford.  We're a middle income family from Poulsbo, Washington; Greg was interested in electrical engineering and music; and my goal was to find a list of colleges that really fit his needs and that required minimal student and parent debt.  I had discovered Net Price Calculator programs in 2009, and they were central to our college search.
Greg ultimately matriculated as an electrical engineering major in the Tufts University School of Engineering in the fall of 2013.  He graduated in May of '17 with a Bachelor of Science in Electrical Engineering along with a minor in Music Engineering with a concentration in Electronic Musical Instrument Design.  While at Tufts, Greg stayed active in music, recording three EPs with his band "Shark Saddle" and also recording four solo EPs and one LP.
Greg is now working as a mechatronics test engineer for Daimler Trucks North America in Portland, Oregon.  Greg is working on Daimler's all-electric truck project, and "mechatronics" is a new engineering field that combines electrical, mechanical, and software engineering.  But Greg has also continued his music career - writing, performing, producing, and recording with a number of bands.  And, just for fun, here's an example where Greg's playing lead guitar on a "Sweet Home" medley with "Joel Gibson Jr and the Hired Guns":
https://www.youtube.com/watch?v=GdTZssoGRFU
Tufts is an expensive private school with very generous aid.  Its NPC results indicated that we should expect Greg to accumulate about $16,000 in total student loans in his four years there, with no parent loans required.  That was about half the total loans we expected at the three state universities - two in our home state - where Greg was accepted.  But the final results at Tufts were better than that.  No parent loans were required, but Greg's student loans were $5,000 less than we expected, a total of $11,000 over his four years there.  So, Greg's total loans were less than one-third of the national average, and his resulting student loan payments are just about $110 per month.
Words, as you might expect, cannot describe how pleased Katia and I are with Greg's experience on "The Hill."
Thank you, Tufts University, and go Jumbos!
While I'm at it, I ought to mention our daughter Maria, the lovely young lady standing next to the old guy in the picture below.  She graduated Summa Cum Laude from Trinity College in Hartford, Connecticut in May of 2019.  At Trinity, Maria carried two majors - Math and Urban Studies, as well as two minors - Russian and Models & Data.  She also tutored other students, she worked two years with disadvantaged youth at the YMCA in downtown Hartford, she spent a semester abroad in the "Math in Moscow" program, she was an active a cappella singer, and 2019 was her third summer doing rocket science in Los Angeles.  At Trinity, Maria also earned a Phi Beta Kappa key, and this year she's teaching English in Russia on a Fulbright at the Tomsk State University of Architecture and Building.  After that, Maria expects to enroll in the Applied Math PhD program at Northwestern University.
Like Tufts University, Trinity College is an expensive private school with honestly generous financial aid, and Maria's final financial numbers at Trinity turned out to be almost exactly equal to Greg's at Tufts.
So, Katia and I are thrilled with Maria's years at "The Summit", and we can only say "Thank you, Trinity College!" and "Go Bantams!" 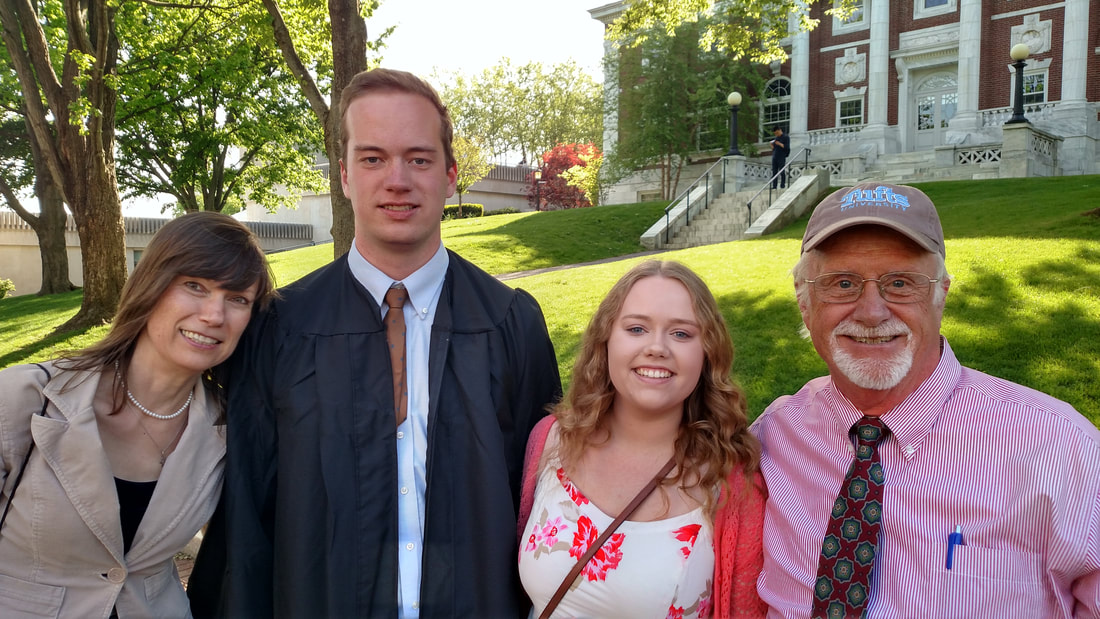 III.    ACG BACKGROUND
Helping Greg on his college search I found that, by using the Net Price Calculator programs that had recently been required by Congress, finding affordable colleges was really the easiest part of a college search.  Just pick a school, type "net price calculator" in its website's search box, answer their questions, turn the crank, and record its results.  With a little practice, the whole process only took ten minutes or so per school, and then we could be certain whether that school would be affordable for us or not.
Later, after Greg's matriculation at Tufts in the fall of 2013, I realized that:
A.  Although Net Price Calculator programs should have revolutionized the affordability aspect of the college search, making the burdens of excessive college costs and loans really a matter of choice for students and families, even the most knowledgeable parents and guidance counselors knew nothing about them at all;
B.  My method of making the best sense out of NPC results was unique, and no one else had published anything addressing the same issues; and
C.  Our family's income was in the same range as the median household incomes of a lot of American states – like Washington, New York, Colorado, California, Minnesota, and plenty of others - making the data I had already collected relevant to a lot of other American families.
So, I explained it, expanded it, and published it as the American College Generosity website, a site that's now in its seventh year.  In addition to showing families how to do their own financial aid searches and how to make sense out of Net Price Calculator results, I include analyses of the actual costs, available aid, and expected loans (if any) each year at about 125 American colleges for sample families at both the middle and lower income levels.
ACG is now used by about a thousand American families each year, and it has become a service project for our whole family, with all of us involved directly or indirectly.  Realizing that Greg's education was largely funded by the generosity of Tufts University - and that Trinity College did the same for our daughter Maria - we offer this service at no charge, doing our best to show our thanks and broaden the impact of the generosity of their colleges.

IV.   SINCE 2013
Let's remember that, when Greg matriculated at Tufts in August of 2013, it was exactly five years since the law requiring Net Price Calculators was passed by Congress and signed into law by President George W. Bush.  Let's also remember that back then - due to the failure of government, the schools, and the press - NPCs and the revolutionary impact that NPCs could have on the educations of our students were almost completely unknown.
So, what's happened since then?  I've been directly involved in promoting NPCs since then, and I can say that NPCs and their potential benefits are just as unknown now as they were then.  In fact, I have only met one parent or student anywhere who has heard the phrase "net price calculator" before meeting me.  That reflects a failure on the part of four key American institutions, something I cover in more detail on my "Four Presidents" page.
To my mind, the most important and valuable resources in America are the best dreams of our children.  And, although it may be little known, the system of American college generosity continues to serve our children and their best dreams now as it has for centuries.

V.  THE ORIGIN OF AMERICAN COLLEGE GENEROSITY
Generosity was the inspiration for this site, and generosity is its theme.
The word generosity frequently came to me as I began helping our son with his college search eight years ago, as I did the same for our daughter six years ago, and as I have continued my research for this site.  I have been continuously inspired by the generosity of the alumni and other benefactors of American colleges who have made educations at their schools possible for our children.
Sometimes extending back for centuries, their generosity has shown a remarkable and lasting faith in their schools and in the generations of students who would benefit from their gifts.  I thank them, and I hope we can show ourselves worthy of both their generosity and their foresight.
But their generosity had a purpose.  It formed a system, a loop, linking previous generations of students with the present generation.  And it was a benefit that needed a beneficiary for its purpose to succeed.  Without you, without your openness to that generosity, the loop will be interrupted, and that system of generosity will fail.
I originally wrote this site in the last months of 2013, an important anniversary of the seminal event in American college generosity.  Three hundred and seventy-five years before then, a very young and well-educated minister died in the Massachusetts Bay Colony leaving half of his wealth and all of his 260 books to a new school founded two years before in a neighboring village, a school named for him in gratitude two years later.
Reverend John Harvard intended that his resources and library would be used for the enlightenment of the teachers and students of that new school.  But, if his money had just been locked in a safe, and if his books were just locked in cases, the purpose of his generosity would have failed.  Instead, his generosity was used to its fullest, becoming an invitation to the generosity of others and resulting in one of the world’s finest universities served by the greatest university library in the world.
The system of American college generosity began there in 1638, it continues to spread and flourish, and its fruit is within your reach today.
May its purpose be validated in you, may your educations be complete, and may your best dreams be fulfilled.

Mark Warns, JD
Founder, Author & Analyst
American College Generosity
Copyright 2020, Mark Warns, All Rights Reserved
As promised, here are Word versions of my Apple-to-Apples templates for your own college costs and expected loans along with a Word version of my blank data input pages that you can download for use by your own family: